Breaking Down Childish Gambino’s “This Is America” Visual

On May 6, 2018, Childish Gambino released the video for “This Is America” and it quickly became his biggest hit. It peaked at #1 on the Billboard Hot 100 Charts and No. 1 on Billboard’s streaming song charts. 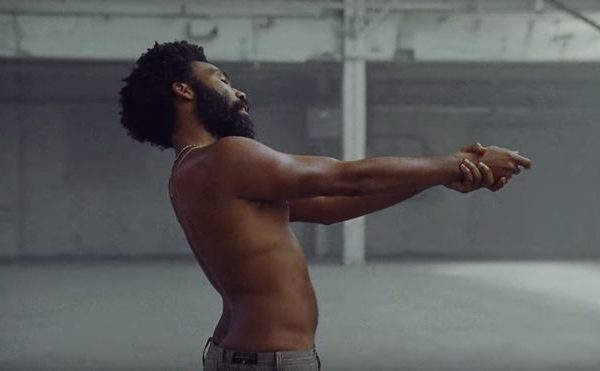 And that is for, it’s ability to display a message of symbolism and metaphors through imagery. What has been described as a “masterpiece” and a “genius” work of art, may also have its questioning moments.

At the beginning of the video, we are introduced to a Black guitarist, who after Gambino’s revelation, (he) is murdered by him. The stance Gambino takes is dramatic enough to highlight that it is nothing short of a reference to Jim Crow. How easily he disposes of a Black man who was once happily making music, tells us how much America (now and then) avoids what Black Americans have contributed to all genres of music; starting most of them. The hood over his head is a representation of the faceless and nameless Black body. And of course, the fact that the hood was white, explains that mostly white artists fell guilty to these actions. 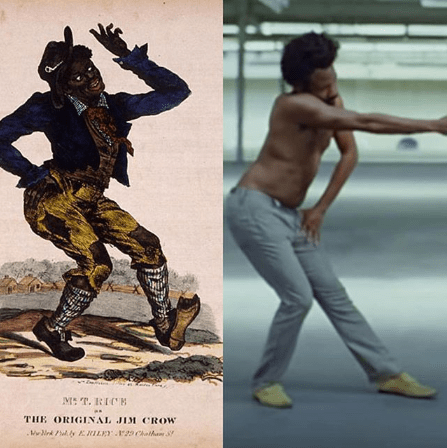 Gambino first places the gun in the hands of a child who is carefully embracing the gun in a red scarf. This is to highlight how the red-wing protects guns and doesn’t realize that youth has now become desensitized to being around them.

After this scenery, Gambino enters a state of what seems never-ending chaos, yet his dancing is easily distracting. As the youth joins him, we realize that this means how easy it is to distract the youth from chaos. Gambino’s point stands clear here, especially because his dancing in the video stands as an effective message. We, the audience stands as distracted right with them.

This also hints at the fascination with Black culture. The dances visibly represent Black culture across the globe, from ‘the Gwara, the Gwara’ that roots from South Africa to the viral dance ‘Shoot.’ Non-Black cultures and Black youth tend to stand back and watch what keeps them away from a socio-political climate.

But did it work effectively?

That scene became the turning point of the video. It is already hard to be Black and witness a dispose of Black bodies. To give it the context of a real-life tragedy was not going to make everyone stand and clap.

This isn’t to discredit that Gambino gained a nick for turning pain into art but only suggests that this scene particularly may have been pushing buttons for some, if not most.

While that stands as pending fact, the rest of the video for the most part work as effectively as possible. Gambino in the facade of Jim Crow moves on from his actions/tragedy rather quickly, hinting that we as people often move on from tragedy before it even happens.

Which is why it is crucial to pay attention to the direction of movement in front of the lens. As Gambino and the youth move in stage left, death and chaos move out stage right.

Despite the adventure Gambino is having himself throughout most of the video, harsh reality makes a comeback. The parked vintage cars scene hope to nick at lack of progression. As a result, every car in the dollying shot is over 20 years old.  He (Gambino) finds himself pulling out a joint, listening to the same white-washed, nameless and faceless, Black artist from the beginning, and distantly avoiding a beautiful SZA who is revealed as the camera slowly dolly’s out. 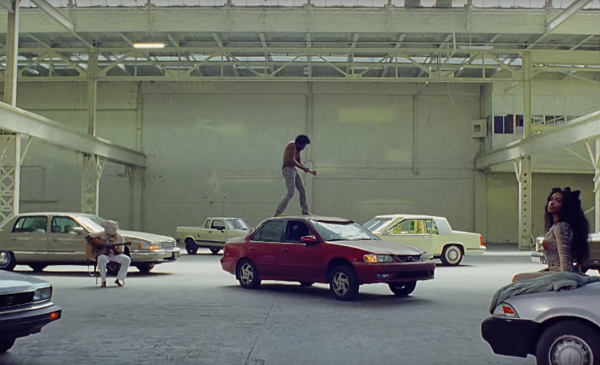 ‘This Is America’ is definitely a visual piece that is up for interpretation. Could the song work the same way without the visual?

The ending shows us that although Gambino has done all it takes to be the caricature of Jim Crow, he cannot escape his reality.  The tough reality of being a Black man at any point in American history. As he tries to escape from the unfocused white bodies behind him, it is important to think of that. 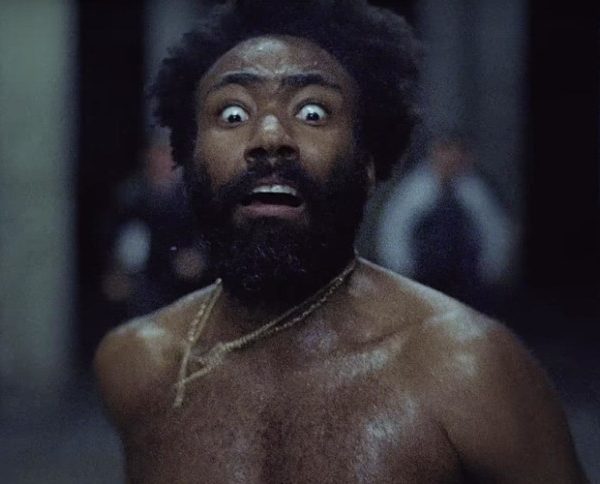 All that he did throughout the video; where he succumbed to white norms, as Jim Crow. Yet he still finds himself running, because he cannot escape the at times scary reality that is being Black.

‘This Is America’ easily tells the narrative of many different cultural perspectives. Although it uses context in a very sensitive way, it did not fail to tell the truth. And the truth still lies. Audiences who cannot experience this pain, have trouble seeing it as pain. Not because they invalidate it, but because they are glorifying how beautifully portrayed it was. Which is nonetheless, a strong factor, yet makes some points of this piece of art almost lack the progression it hoped to conspire. A promise not yet fulfilled.

What do you feel worked most effectively in the symbolism/metaphors of Childish Gambino’s ‘This Is America’?