Denetric Malope is a South African-born international model. He recently walked the runway in Venice, Italy, for the iconic Dolce & Gabbana 2021 Alta Moda show, which was attended by celebrities such as JLo, Ciara, Megan Thee Stallion, and more. He has also appeared in the Prada SS/22 Men’s Show, which was filmed in Milan at the Fondazione Prada’s Deposito and in Sardinia, Italy. He speaks to us about model life in Italy, hanging out with luxury designers, and his values!

Honestly, it hasn’t kicked in that “Oh my god this is so big” like how everybody sees it. With me, it’s like, “Ok another goal reached,” and ticking it off. It’s so fulfilling doing something that I love, though, and seeing progress because, for me, it’s not about being big; it’s about being progressive.

I met Raf Simmons, he fitted me, and we even had a smoke together. But the thing about me is I have two personalities, the work mode and the time to play, so it was really professional. It got super exciting on the last day when we were having dinner. That’s when Raf came and hugged all of us and thanked us. That’s when it kicked in!

Waking up and making noise, and waking my roomie Marvin (he hates me for that). So I make breakfast and chill, usually around 6 pm in the evening, I dress up and meet with my friend George, and we go to Navelli and chill by the water. Or we go to Porta Romana, meet other people and have fun there.

I used to think it was a small industry, but it’s massive. There are many departments and all sorts of things. I was in the fashion capital, so I got to experience it on a large scale.

Naomi, obviously, she’s the mother! Alton Mason, Eman, who’s kind of my friend, and George Pailman, who’s also my friend, but I’ve looked up to him as well.

Generally, before any show, even in SA, I usually got nervous. But with the D&G show, it felt like that was my moment. Either I proved myself, or I was going to suck. With Prada, we shot for 2 weeks straight, and I was always nervous. But with Dolce & Gabbana, it was my time to shine. When walking, I could see all those Icons in front rows, and it just felt so amazing, like I was at the right place at the right time.

Mr. Dolce was fixing us as we were about to walk out, telling us to kill it. He’s definitely my best friend! (laughs).

Nothing! I look at it as where I come from, and where I am now is a process. I had to go through my past to get to where I am now.  I feel that experiences make us who we are.

There’s definitely a lot coming from editorials, shows, etc., but I can’t share yet. The future is super exciting!

Always believe in yourself and your supremacy. Always see what people don’t see in you. Don’t be afraid to take a step. Love and protect yourself. You come first; just be a superstar! We don’t know how long we’ll live, so just do everything you want to do! 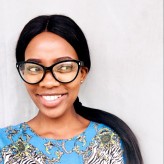 0 0 0 0 0
Previous ArticleThe Rise of RUBI ROSE Through​ the Power of Music
Next ArticleCelebrity stylist - Manny Jay on his Met Gala debut and surviving cancer!
Comments (0)